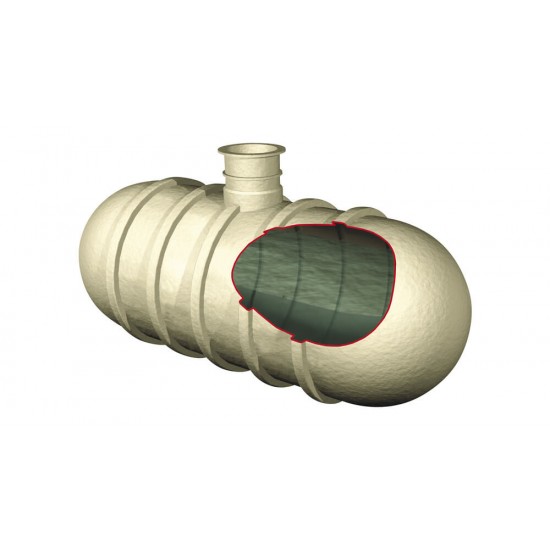 Spherical Cesspool are manufactured as standard from 2,800 to 4,600 litres net working capacity. Cylindrical cesspools are available with capacities from 18,000 to 26,000 litres.
The cylindrical tank allows reduced depth excavation in comparison with the same size of spherical tank, offering considerable savings where ground conditions are difficult or where there is a high water table.
Cesspools are designed for storage only, with their contents being emptied at regular intervals using tankers. High Level Alarms with audible and visual warnings are available for all tanks to enable level monitoring for optimum use.


When sizing a storage tank for domestic properties it should be noted that Building Regulations require a minimum capacity of 18,000 litres (2 people) under Environment Agency regulations.
When positioning units, there are a number of factors to be considered. Systems should not be positioned closer than 7 metres to any dwelling and as far as possible from any watercourse, normally not less than 10 metres. Adequate access for tankers to empty should also be taken into consideration.

Clearwater pollution control was established in 1978 and has a proven track record in the design and manufature of waste water treatment systems. They have produced a range of systems for waste water handling and also offer good quality, simplified rainwater harvesting systems for the home and garden controlled by a pump, suitable for either direct or gravity fed applications.
Clearwater Cesspool 63000
Based on 0 reviews. - Write a review
£13,866.00
Ex Tax: £11,555.00

How far from a building does a septic tank/treatment plant need to be?
29 Jan 0

Getting The Levels Right
13 May 0

Is Your Soak-away/Drainage Field Failing?
20 Nov 0